Performers / Professionals From Around The Globe

On this great occasion, Organizing Committee heartily invites participants from all over the globe to take part in this annual conference. Biopolymers 2020 with the theme " Economic and Environmental Advantages for Sustainable Future" aims at sharing new ideas and new technologies amongst the professionals, industrialists and students from research areas of Biofuels, Bioenergy, Chemical Engineering, Chemistry and Physics to share their recent innovations and applications in various fields and indulge in interactive discussions and technical sessions at the event. Biopolymers are chain-like molecules made up of repeating chemical blocks and can be very long in length. Depending on the nature of the repeating unit they are made of polysaccharides, proteins of amino acids, and nucleic acids of nucleotides. The studies are more concerned to Biocomposites, Green Composites, Biopolymer Feed Stock Challenges, Biofibers & Microbial Cellulose, Biomaterials and Bioplastics. Advanced studies are being made to improvise developments in Biopolymer Technology, Plastic pollution and promising solutions, Waste Management, pharmaceutical and biomedical applications, Biodegrade ability, and many more.

The Conference will also have a space for companies and/or institutions to present their services, products, innovations and research results.

Over the past few years, global economic activities have increased a lot. This tremendous growth has raised serious problems about current important patterns of production and consumption. As the current society has increased its attention in understanding of the environmental aspects and its industrial practices, greater attention has been given to the concept of sustainable economic systems that rely on energy from undepletable source and materials. The use of Bio-based materials and  Biologically derived Polymers becomes as an important component of this global world.

London, the capital of England and the United Kingdom, is a 21st-century city with history stretching back to Roman times. At its center stand the imposing Houses of Parliament, the iconic ‘Big Ben’ clock tower and Westminster Abbey, site of British monarch coronations. Across the Thames River, the London Eye observation wheel provides panoramic views of the South Bank cultural complex, and the entire city. London has a diverse range of people and cultures, and more than 300 languages are spoken in the region. Its estimated mid-2016 municipal population (corresponding to Greater London) was 8,787,892, the largest of any city in the European Union and accounting for 13.4% of the UK population. London's urban area is the second most populous in the EU, after Paris, with 9,787,426 inhabitants at the 2011 census. The city's metropolitan area is the most populous in the EU with 14,040,163 inhabitants in 2016, while the Greater London Authority states the population of the city-region as 22.7 million. London was the world's most populous city from c.1831 to 1925.

Importance and Scope:
Growing energy crisis, climate variations and carbon dioxide discharge from fossil fuels makes it a high concern to look for low carbon energy resources. Biofuels have been progressively explored as a successful alternative source of fuel and serve a key target for the future energy market that can play a vital role in preserving energy security.
It is mainly considered as potentially feasible, low-carbon energy source. Biofuels & Bioenergy- 2020 is the event devised for the International professionals to accelerate the promulgation and application of research discoveries related to biofuels & bioenergy as replacement fuels. It is a scientific podium to meet counterpart key decision makers all around the Biotech Organizations, Academic Institutions, Industries, & Environment Related Institutes etc., and making the congress an ideal platform to participate and share the knowledge in the field of bioenergy and biofuels.
Biofuels & Bioenergy-2019 is a platform to meet insightful leaders through the research talks and presentations and encourage many novel approaches of production and scale up of renewable energy. It adds a forum for all stakeholders in the bioenergy sector, original research, featuring review articles, research and development spotlights, news, commentaries, interviews with key opinion leaders and much more, with a prospect to building an international community of bioenergy communication.
Market Analysis-
The recognition of biofuels has prevailed since the invention of the motor vehicle. With the discovery of immense petroleum deposits, gasoline and diesel was accessible reasonably, thereby confiding biofuels to the background. Nonetheless, the recent surge in oil prices, added with mounting worries related to global warming linked with carbon dioxide (CO2), emissions have culminated in the re-emergence of biofuels as feasible alternatives. Biofuel is manufactured using a wide range of resources. This resource has grown preferably in recent years, aiding to shape a dexterous industry that is steadily searching for new technologies and feedstock.
In fact, industry demand for reasonable, candid sources of fats and oils is bracing promising research on advanced feedstock such as Algae and Camelina. With more than a decade of commercial-scale production, the industry takes pride in its meticulous approach to improvement and strong target on sustainability.
Production has increased from around 25 million gallons in the early 2000s to about 1.7 billion gallons advanced biofuel in 2014. With projected feedstock availability, the industry has settled a goal of manufacturing about 10 percent of the diesel transportation market by 2022. The industry’s economic impact is hovered to thrive significantly with pursued production increases. The industry backs jobs in diverse sectors, from manufacturing to transportation, agriculture and service.
The biofuels industry is receiving much attention in recent years, as they help to minimize carbon emissions, qualify for carbon credits, reduce dependence over fossil fuels, and utilize feedstock, which is renewable in nature. The governments of at least 24 countries have issued biofuel blending mandates, development plans, policies, and regulations for promotion and use of biofuels.
Global biofuels-Availability and Sustainability of Feedstocks at a Local and Global Level-
Currently most biofuels are created from Crop harvests that can be utilized for nourishment (e.g. corn, wheat, sugar stick, sugar beet, palm oil, assault, soy, and so on). Although biofuels offer various advantages to society, there has been a worldwide open deliberation as of late concerning the effects of biofuels (and bioenergy) on nourishment generation and costs, carbon stores (in timberlands), land utilize, and related issues. Wide differing qualities of 'non-sustenance' feedstocks are possibly accessible universally for biofuel production including vitality crops (e.g. Miscanthus, Jatropha, Short Rotation Copice), squanders (e.g. waste oils, nourishment handling squanders, and so on), rural deposits (straw, corn stover, and so forth), ranger service buildups and novel feedstocks, for example, green growth.
Growth in production and use of biofuels worldwide
The Global Renewable Fuels Alliance GRFA declared an intuitive guide demonstrating the present command and arranged focuses for biofuel production in nations over the globe. The GRFA estimates that worldwide fuel ethanol production will surpass 90 billion liters in 2014. As per the US Energy Information Administration, the US created more than 13.3 billion gallons of ethanol in 2013 (marginally up on the 2012 figure). Different projections for worldwide development of biofuels production to 2020 have been made by global associations, free specialists and biofuels affiliations. The PEW Trusts Report Who's triumphant the perfect vitality race? 2012 demonstrates that the US is at present the world pioneer in biofuel ventures with $1.5bn put resources into 2012. In any case, comprehensively, interest in biofuels fell 47% somewhere around 2011 and 2012.
World Fuel Ethanol Production in 2016
Total Global production of Biofuels is 25676 Million of Gallons.  United States 14806, Brazil 7093, European Union 1387, China 813, Canada 436, Thailand 334, Argentina 211, India 401, Rest of World 391.  Brazil and the USA represent the dominant part of worldwide bioethanol Production. Global exchange ethanol is relied upon to become quickly throughout the following decade, predominantly with fares from Brazil to the US and EU. Be that as it may, development in global exchange biodiesel is foreseen not to become essentially because of specialized issues, issues encompassing exchange palm oil, arrangements, for example, hostile to dumping obligations, and expanded national generation of biodiesel by expending nations. 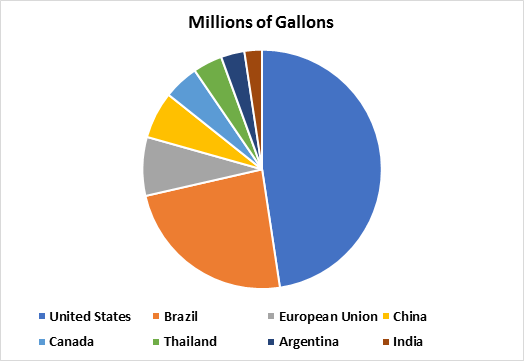 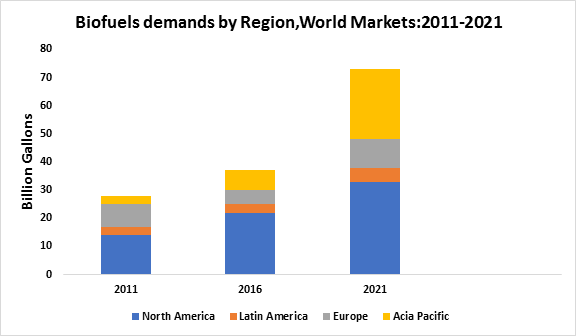 This demonstrates "somewhere around 2010 and 2011 biofuel utilization expanded by 3%, which deciphers into 13.6 million tons of oil proportionate (toe) utilized as a part of 2011 contrasted with 13.2 million tons in 2010. The European Union's consideration has moved to setting up maintainability frameworks to check that the biofuel utilized as a part of the different nations conforms to the Renewable Energy Directive's manageability criteria. "In 2010, The European Biodiesel Board assessed that European Union biodiesel Production total 9.6 million metric tons. The EBB evaluates the EU oversees over portion of the world's biodiesel yield. In 2011, generation diminished by 10% to 8.6 million metric tons. European Biodiesel Production 2011
Strategies for developing the biofuels market:
The current stage of development of biofuels is influenced by governments who have recognized the triple challenges of climate change, energy security and rural development. The significance of this phase, compared to the rapid phase of development of ethanol in Brazil in the 1970s, is that the issues are now global. The demand for biofuels is not just a desire of policy makers, but is reflected in surveys of the public – the consumer. Of the Europeans surveyed, 47% say they would be prepared to pay more for a vehicle that ran on biofuels, and 41% would be prepared to pay a little more for biofuels. BP’s strategy has involved the formation of a dedicated business unit to pursue opportunities across the value chain from accessing feedstock, through conversion to trading and marketing. 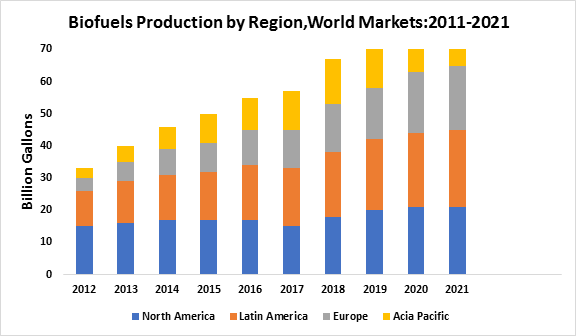 As the only alternative for fossil fuels, biofuels continue to grow in importance, despite a significant slowdown in investment. International trade remains active, with dynamic growth from the major exporting countries. Current markets are therefore expected to maintain their current levels whilst waiting for the emergence of new biofuel technologies from 2015 onwards. The USA has been the world’s leading producer and consumer of biofuels since 2007 followed by South America and Europe, with slightly lower consumption levels, but with a strong exertion of biodiesel in Europe and ethanol in Brazil. After a notable slowdown in growth between 2008 & 2009, consumption of biofuels worldwide returned to growth in although the European Union shows relatively stable consumption of biodiesel, South America has seen its consumption double, whilst that of the USA has fallen by nearly 50%. Ethanol consumption is growing steadily at the rate of 20% in Europe and North America, whilst the situation remains stable or possibly declines slightly in South America.
Major Biofuel Associations around the Globe:
Renewable Fuels Association
Biofuels Association of Australia
Russian Biofuels Association
European Biodiesel Board
European Biomass Industry Association
Aebiom - European Biomass Association

A huge thanks to all our amazing partners. We couldn’t have a conference without you!

A huge thanks to all our amazing partners. We couldn’t have a conference without you!